The fourth book in my Gods of Earth series is now out!! Release dates for the last two books are also posted and available for pre-order. Cover artwork, links and synopsis are below.

ENEMY of a GOD 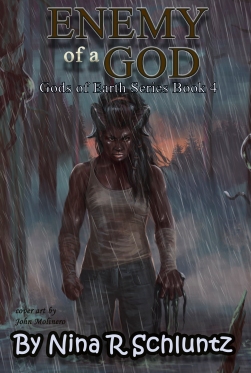 The world is ending and the gods are abandoning Earth. A strange woman arrives at the same time the parasite symbiotes do. She has no memory of who she is and the question remains, is she an ally to save earth or the enemy of the gods here to destroy them?

Jayson is the first to find her and he forms an immediate friendship with her. They are both outcasts with a dark past. He makes a deal with a god, Cooper, in an attempt to learn more about his alien friend. He doesn’t expect to fall in love with Cooper and worse, learn that his alien friend must die in order to save Earth. 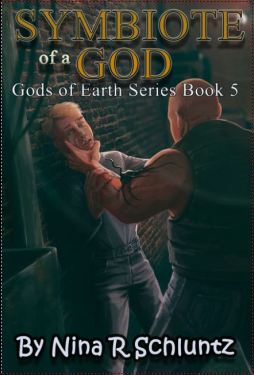 Stephen, Nick, and Lawrence have been best friends since college. Stephen and Nick are scientists, tasked with finding a cure to the symbiotes which have invaded Earth and use humans as hosts. Removing the symbiote kills the human, and a human doesn’t live long once infected.

Months after the initial invasion, Lawrence becomes infected and seeks the help of his friends. The rush to find a cure is now paramount, but something is strange about Lawrence’s infection. He is still in control of his body, and he can now understand the symbiotes. Nick and Stephen realize he may hold the cure to finally ridding the world of the symbiotes.

Earth is the second planet Carter has created, and now the same symbiotes that destroyed his first planet, are here, destroying Earth. Afraid he will only aide in Earth’s destruction, since it’s his soulmate and lover behind the invasion, he goes into hiding.

Jayson knows Carter is the only god who can save Earth and he is done waiting for him to come back. He resurrects the god and saves the planet, but its something not just any human can do. Jayson realizes there’s more to his relationship with Carter than he thought. He’d assumed he was Cooper’s soulmate, he loves Cooper, but when he keeps running into Carter he realizes the truth. A god has a different soulmate on every planet, and on Earth, he is Carter’s soulmate.

But Carter doesn’t want him. His soulmate from his first planet was destructive and Carter fears what Jayson will become if he bonds with him. Jayson has to convince the god that he is different, and that your past does not determine your future.

Second book in the Gods of Earth Series is out, Prophet of a God!! The story continues to follow Cooper, now an adult as he pursues his own love interest. The first book in the series, Influence of a God was about Cooper helping his guardians find love.

Isaiah has heard voices in his head his entire life, so it’s ironic when his brother declares that he has been chosen as a prophet of god. Isaiah assists his brother in his search for the messiah and quickly discovers the god chose his brother in an effort to get closer to Isaiah.

The messiah isn’t shy at all in declaring that Isaiah is fated to be with him. But the voice in Isaiah’s head is skeptical and easily finds errors in the god’s claims.

Cooper is a god, one of many on Earth, but he is approved to pose as a messiah. He warps the path he’s supposed to follow in an effort to get closer to a man that is supposed to be his lover for only one night. Doing so has consequences, because Isaiah is not the man he expected. For one, he cuts himself in an effort to deal with the darkness of his past. And second, there’s the pesky sprite that loiters on Isaiah’s shoulder, whispering advice that Cooper would rather it didn’t.

The last book in the Enukara series will be released this week! To celebrate, the series is going on a thirty day tour! The first stop is today on Silver Dagger Book Tours!

The second generation of dragons, known for being a unified force of soldiers, have never grown to adulthood. Until now. Destiny is the first to reach maturity. Nurtured by the dragon king’s 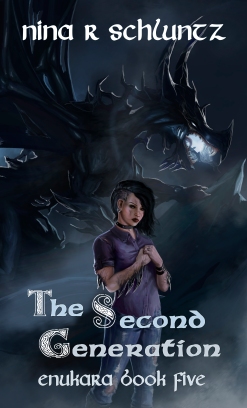 closest allies, she has become more than a killer—she wants to belong. But she doesn’t fit with any of the dragons or the humans.

As her first breeding day arrives, she must choose a mate. Her choice could deter a war, or led to the end of the dragon king’s reign.

The problem is, only one person knows how much is at stake, Jeremiah, whose drug abuse has left him barely functional. As Jeremiah’s life spirals, he realizes the end of all dragons hinges on his ability to stay sober enough to save the dragon king from his untimely destiny.

Meant to bring harmony to the Earth after years of turmoil from the dragon invasion, Elemental Dragons emerge and seek their human counterparts—Dragon Mages.

Deemed a threat to all current social orders and leaders, some seek to prevent the Elemental Dragons from finding their mages and attaining their true powers. Others offer a recruitment program, wanting to capitalize on their abilities.

Xander has spent most of his life loyal to the dragon king, who adopted him as a hatchling. Upon his encounter with a human who can become his Dragon Mage, he feels his first independent desires and his loyalties are tested.

Kaylee never knew her background, or that much about dragons. Finding herself with a bloodline capable of making her into a powerful mage, she must decide which Elemental Dragon she desires to bond with, and which leader she wishes to align with.

Updates to my Dragon series! Artwork has been released for book four that comes out this week, as well as a sneak peak for the artwork on book five!

The next in the series focuses on Xander’s story as he discovers his mate and begins to understand the powers he has that makes him different from all other dragons!

Visit my Enukara Series page to see the details!

Today I was interviewed by Brad on Brad’s cafe, to discuss my dragon series, Enukara, about shapeshifting dragons and healers! Click the link below to see the video and check out the link on my site, here, to see the books and descriptions.

Yours truly is being featured in the recent issue of the “Starving Artist” magazine. Click the link to buy it in high res or paperback. There’s also a free low res available at here.

Feel free to check it out and read about my new dragon romance series!

Dragons and Healers: Enukara Book One

The dragons came to earth seeking an Enukara. The invasion was silent, taking decades to unfold. The first generation was smarter than humans, sent to befriend, learn, and study the local inhabitants. They crippled Earth’s technology with minimal effort. The second generation were the foot soldiers and devastated any human opposition. The following generations reproduced quickly and took Earth by sheer numbers. Resources grew slim. Rolling blackouts, burnt crops, and ravaged livestock forced man to retaliate. Thirty years passed before the first Enukara. A simple act of kindness from a human toward a dragon triggered the miracle. The human was blessed with the ability to heal another’s wound. The dragon bonded to him was granted immortality. The price for this gift was simple. The dragon’s life was bound to the human. If the human died, so would the dragon. The human could only heal another if the energy was transferred through the dragon. If he touched someone of his own accord, the transfer would drain him, leaving him lifeless. The dragon was forced to take on the role of guardian, forever protecting his human if he wanted to survive.

The greed of dragons and humans was underestimated. For if an Enukara’s life was taken by another, they would inherit the immortality blessed to the dragon. Both human and dragon could steal this gift. This discovery led to the death of thousands of Enukaras over the next sixty years. Most Enukaras were slain days after the blessing.

The dynamics changed when one dragon killed his own Enukara out of desperation. The power he inherited was unfathomable. This dragon hunted and killed every immortal who had slain an Enukara. He eliminated all remaining Enukaras and a semblance of peace ensued.

What was once considered a blessing is now feared. Dragons and humans have ceased all interaction to avoid enacting the Enukara.

There has been no Enukara for twenty years.

It has been one hundred and ten years since the first generation of dragons landed on Earth. 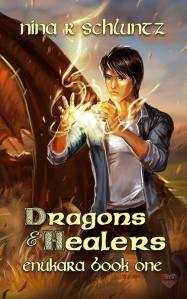 A simple act of kindness from a human toward a dragon triggered the Enukara–giving the human the ability to heal the wounds of
others. The dragon bonded to him was granted immortality. The price for this gift was simple. The dragon’s life was bound to the
human.
The greed of dragons and humans was underestimated. For if an Enukara’s life was taken by another, they would inherit the
immortality blessed to the dragon. Both human and dragon could steal this gift. The slaughter of all Enukaras quickly ensued, until one
dragon killed his own Enukara.
The power he inherited was unfathomable. He hunted and killed every immortal who had slain an Enukara. A new Enukara emerges who challenges the mindset of the immortal dragon and the Enukara hopes to alter the fate of humanity, by showing the dragon how to love once again.

My latest novel is out today! “Nosy Neighbors” is paranormal romance. See details below.

Julian is used to drama, seeing ghosts tends to do that to a person’s life, but when he falls for a man known as the neighborhood murderer–the dead help him uncover secrets no housewife could predict.

Moving into a suburban, middle class, stereotypical neighborhood was never on Julian’s to do list. When his identical twin brother inherits their Aunt’s house in such a place, then finds a good job, Julian reluctantly follows. He expected to feel isolated by being the only gay person on the block, okay, more likely the zip code, but a few nosy housewives eagerly inform him the neighbor across the street is gay, and punned, Mr. Creepersen, due to several murders that occurred in his basement five years ago.

mizner13
Create a free website or blog at WordPress.com.